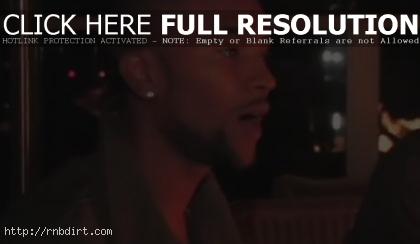 The apparent finale YouTube preview of ‘Life After B2K’ has been posted online, where Raz B is confronted by J-Boog and Lil Fizz – apparently over his claims against the group’s former label boss. “We had talks about being a team and we had talks about… ni**a I could kill you right now,” Boog told Raz B. “What the fu**! I can’t trust you with that again. You dig me? It’s like, tell me why I should trust you again. Don’t tell me I set you up ni**a. I told you no and you did it without me and if you was going to do it wait for the publicist to fu**in give me a statement so you wouldn’t sound illiterate ni**a, and ignorant ni**a. I said wait and you did it without me ni**a.”

Raz B And Ricky Romance At Mr. Chow… With Chris Stokes

De’Mario ‘Raz B’ Thornton and his brother Ricardo ‘Ricky Romance’ Thornton were spotted out with their cousin Chris Stokes at Mr. Chow in Beverly Hills for a dinner and photo op on Wednesday (January 2). “The whole world wants to see this,” Raz said gesturing to Stokes. “C’mon cousin. We love each other man. See this right here?” Ricky added, “Family unity right here. It’s nothing.” Then Raz and Ricky bro-hugged Chris before going their separate ways. Watch footage at TMZ.

Chris Stokes is reacting to the new video featuring his cousin Raz B retracting claims that he made against the former B2K manager in a statement released Thursday morning (December 27). “I’m happy that DeMario ‘Raz B’ Thornton and Ricardo Thornton realized their mistakes and admitted to lying,” he said. “I have always supported my family and have always been a stand-up person. I knew that the truth would eventually come to light.”

But Ricky Romance tells MTV News he stands by all the original allegations and isn’t recanting his story. Read more.

Raz B of B2K recorded a video statement recanting his allegations against the boy band’s former manager and his cousin Chris Stokes. “I would like to send a public apology for some tapes that were leaked without my authority. I just want to say those allegations are not true with Chris Stokes and Marques Houston, and I apologize for any hurt that this may cause publicly, financially.” Watch it below.

Chris Stokes spoke with MTV News following a video posting by Raz B of B2K and his brother Ricky Romance which featured shocking allegations by the siblings. “All the allegations they made are false,” said Stokes. “I’m not gay. And I’m married. And I have four kids. I been with my wife for 16 years. And I’m not a child molester. So those are all false allegations. I’m gonna sue them. And I owe that to my wife and kids, period. It’s ridiculous.”

MTV also spoke with Kevin Sullivan, Raz B’s business partner and the COO of their company, Raz Beatz Entertainment, for comment. “With something of this magnitude, you always look at what the best time is [to talk about it,] and he felt compelled … that this has built up,” Sullivan said. “[He was saying,] ‘I’m tired, this is my story.’ It’s something that’s spiritual, and God says now is the time.” Read more.

Former B2K star Omarion has issued a statement regarding the accusations against Chris Stokes made by Demario ‘Raz B’ Thorton and Ricardo ‘Ricky Romance’ Thorton. “I want to be on the record as saying that ‘Raz B’ Thorton and Ricardo Thorton are lying regarding Chris Stokes,” Omari said. “Chris is a father figure to myself, and many others in the industry. He’s guided us, helped raised us and is nothing more than an inspiration and someone I respect to and look up to. I have spent countless hours, days, weeks and months with the man since the age of 5 and have never once seen him behave inappropriately. He’s married to my aunt and I know this man very well. I stand behind him with no question whatsoever. I have grown up around Chris and this is crazy to me. These people have damaged me, and my reputation and I won’t stand silent and will do all within my means to speak the truth about this matter.”

Chris Stokes Responds To Raz B And Ricky Romance Claims

TUG Records boss Chris Stokes is responding to allegations made by his cousins, former B2K star Raz B and his brother Ricky Romance. “The accusations that Demario ‘Raz B’ Thorton and Ricardo Thorton have made are vehemently false and hold no merit,” Stokes said. “I have recently stopped financially supporting both individuals along with assisting them with their criminal and legal matters which leads me to believe they are resentful and looking to benefit financially from this. My family is my first priority and the reason why I have been so supportive of them. In bringing these false claims, they have not only slandered me, they have also put me in a position to ensure that the truth is known and I will take all legal routes to protect myself, my family and my four children. It’s also quite ironic that these statements were made only 2 weeks after they were denied admittance by a venue for an event I hosted in Beverly Hills.”

Toure caught up with Bow Wow and former B2K star Omarion to discuss their new album ‘Face Off’. Toure was giving the pair a hard time in the goofy clip, suggesting Omari was taking Chris Brown’s moves and asking about “his” ‘Naked’ video, which was a Marques Houston clip. This caused Bow Wow to unleash on the journalist. In a second clip, Bow Wow fumes over never getting a #1 video on ‘Total Request Live’, hoping to end that streak with ‘Face Off’. While Bow Wow raged, Omari said, “I ain’t gonna scream it. I ain’t gonna tell them I’m the best. But, I feel like I’m good, I feel like I’m good at what I do.” Bow Wow promises, “We’re gonna make them respect us.” Video has since been removed from YouTube.

A third clip featuring the B2K reality show ‘Life After B2K’ has been posted online. Lil Fizz, Raz-B, and J-Boog visited The Cheesecake Factory, and later Raz-B and his mom got involved in a confrontation with security at a club trying to meet up with Omarion and Raz’s cousin and TUG CEO Chris Stokes. They weren’t allowed in the club and the pair talked about it. The clip has since been removed from YouTube.

Omarion Talks About Working With Bow Wow On ‘Face Off’

Omarion and Bow Wow team up on the new album ‘Face Off’ and its first single ‘Girlfriend’, and the former B2K star spoke about the collaboration in a report for Artisan News Service. “Well he’s like family to me,” Omari said. “That’s like my brother. Really when you get to work with family like that, it’s not work.” Watch the segment at YouTube.