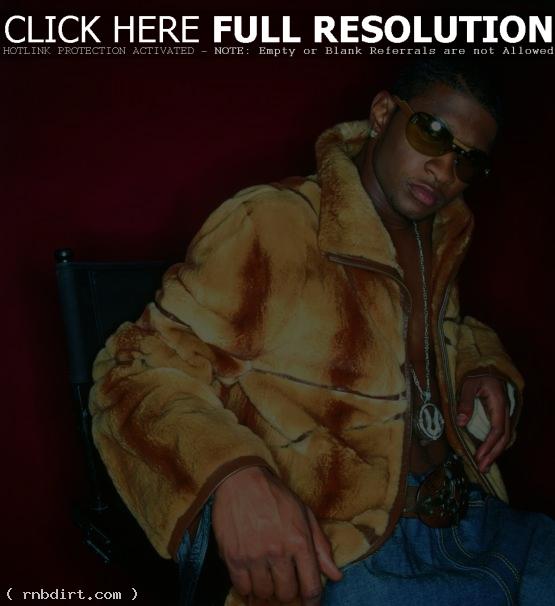 Usher dropped by ‘The Tonight Show with Jay Leno’ on Monday (November
14) to promote his new film ‘In The Mix’, out November 23rd. He also discussed
groupies, a possible extended stint in Las Vegas, being a germophobe, his
27th birthday, the new DVD, and more. Read on for a rough transcript.

Jay: All right. My next guest is an artist at the top of his game.
A five-time Grammy winner, also starring in the movie “in the mix,” which
opens nationwide on November 23rd. Please welcome usher!

Jay: How you doing, buddy? Good to see you.

Jay: I think the last time we were together was probably in Las Vegas, right?

Usher: Yeah, yeah, we had a good time out there in Las Vegas.

Usher: Yeah, yeah. Well, Vegas is going to slowly, but surely, become
a home away from home for me.

Usher: Yeah. No, but similar to how Fred Astaire — I’m sorry. Frank
Sinatra.

Jay: Really? Did you ever see the classic album, “Sinatra at the Sands”?

Jay: Just kind of a small room, kind of cool —

Usher: But I got a real good friend, Mr. Wynn.

Usher: Possibly do something out there with him.

Usher: Yeah, yeah, yeah. Not like what we did, though. We had a show there, the crowd was hot. We had a good time. You know —

Jay: And how are Vegas audiences different? What do you see that —

Usher: Much different. Well, the audience is different, obviously, because we got a lot of tourists. Well, here — well — where you guys from, here?

[ Cheers ] Yeah, man! Cavaliers — we got Cleveland represented in the house?

Jay: Now, you have some very — you have very devoted fans. Because I always kind of hear — whenever I’m on the road, you’ve either been there or you’re coming. But there are always Usher fans. What’s, like, the craziest
fan you’ve had?

Usher: The craziest fan I had. Well, there was this one girl in Connecticut. You know —

[ Laughter ] When the eyebrows go up, it’s odd.

Usher: Well, I mean, I don’t know if it was good, but she ended up,
to get my attention, to get our attention, she chased the bus buck-naked.

[ Laughter ] That’s one way of getting your attention. You know what I mean?

Jay: Now, why didn’t the bus stop? What are you talking — okay, so
you’re getting on the bus and what?

[ Laughter ] And you look over and she’s running next to the bus?

Usher: Maybe she’s trying to hitch a ride or something.

Jay: Well that would be unusual.

Usher: About, you know, fans, they do a lot of different things. I’ve
checked into hotels and cf1 o had fans pose as, like, you know, housekeeper in the room and ask for autographs. There was one that was in the closet one time.

Jay: In the closet?

Usher: Yeah, yeah. All right. Now, I overheard some things. You’re like a germ freak, right?

Usher: Somewhat. Not really a germ freak. Well, I mean, throughout the course of the day, you know, men, in particular, you know, we kind of like — we have our masculine things. So sometimes, we might dig in an ear, pick a nose, grab a a crotch.

[ Laughter ] So, I figure, if I’m going to meet people and shake their
hands over and over and over again, I don’t want to pass my germs to them. So I just have, like, a little sanitizer in my hand.

Usher: It’s something my cousin taught me when I was younger. You know, you always keep your — you know what I mean. Come on, jay. You know what you do with your hands.

[ Laughter and applause ] And I mean that in no way funny.

Jay: Now, let me ask. You had a birthday recently, right?

Usher: You know what? Normally, I always have a big, big birthday bash. And this year, I just decided I would do something really, really simple. My mother, my closest friend, my brother, Keith Thomas, my entire family and my record label, as well as my management company, we came together, did a dinner. But then, we had a party out here for the release of my DVD.

Usher: In stores now, as a matter of a fact. You guys go check it out.

[ Laughter ] But we did a party. I had a release party for it. And Paris
Hilton sang “Happy Birthday” to me.

Usher: Yeah. It was nice.

Jay: Was there any — did they shoot any video?

Jay: Now, let me ask you something. Well, you’re not starting your acting career. You got another movie coming out.

Usher: New movie coming out. It comes out November 23rd, “In The Mix.”

Usher: Well, as an artist, there’s that instant gratification. I mean,
you give it out to the audience and, immediately, they give you the energy back. As an actor, you have to make conscious decisions, you know, to hopefully take the character in the right direction. Also, you’re building a a character. So, therefore, you know, you have to hope that they’ll like it a year later.

Jay: So, why’d you pick this movie? What’s the story?

Usher: Well, my character, Darrell Williams, the fly guy, New York City dee-jay, he finds himself caught in a situation home a mobster’s princess, his pride and joy, home. And I end up taking a bullet there.

Usher: Yes, there’s an assassination attempt on his life. I end up taking a bullet. From there, they take me in. He actually appoints me to be her bodyguard. So, the drama between being a a mobster’s bodyguard, or the bodyguard of his daughter, imagine that. The pressure there. One, the pressure
there. Two, we end up in a little relationship.

Jay: “Relationship.” So, you’re guarding the body a a little too closely?

Jay: Now, let’s talk about dating. Now, I heard you were dating alicia
keys. Is this true?

Jay: Now we have a clip of the movie. What’s happening in this scene
here?

Usher: Well, as I told you earlier, the mobster, the mafia don of all
dons, Chazz Palminteri. He’s asking me to take on the responsibility as dolly’s bodyguard.

Jay: This is a family movie, r-rated movie?

Usher: No, this is a movie that everybody can go see.

Usher: The beautiful thing about it — if I can just go into this real
quick.

Usher: You know, one of the the main reasons why I wanted to do a film like this is because I wanted something that everybody could see, from age 5 to 60. Everybody can go see this. So, on the thanksgiving holidays, after you have some turkey, a few people are gonna go to sleep, of course. But then, for the rest that want to go out and enjoy a nice film —

Usher: Let me get this straight. You want me to drive dolly and go wherever she goes?

Usher: I can understand if you say no, Darrell. I mean, it’s a very
dangerous situation here.

Usher: Right. Of course, you’d be taken care of, but all the money in
the world won’t mean much if you’re dead.

Usher: Or more like a human shield. And it won’t be groupies coming
at you. It would be guys with guns.

Usher: I never forget my father’s face when I graduated from college.
He was so proud of me. That would have never happened without you, mr.
P. So, if you’re telling me you need me now, I’m here.