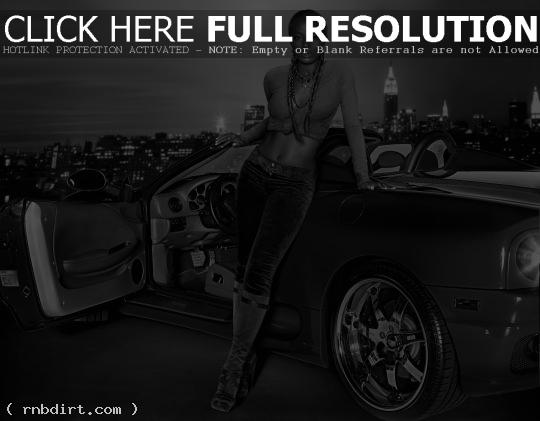 Mary J. Blige dropped by CNN’s ‘Showbiz Tonight’ on Monday (January 9) to talk with host Brooke Anderson about her new album, ‘The Breakthrough’. The singer discussed the sales success she’s enjoyed with the new album, her previous battles with drugs and alcohol, surviving abusive relationships, how hip hop videos have degraded women, and more. Read on for a complete transcript of the appearance.

ANDERSON: It is time now for a “SHOWBIZ Sitdown” with R&B singer
Mary J. Blige, who has just had a week really fit for the history books.
The three-time Grammy Award winner is now out with her seventh album. It`s
called “The Breakthrough,” and it`s already gone platinum. First week sales
were extremely strong, scoring Mary the best opening week for an R&B
solo artist in Soundscan history.

And Mary J. Blige, she`s joining us now. Congratulations on all of this.

ANDERSON: One point five million copies and counting. It was released
right before the holidays. So a pretty good Christmas gift.

ANDERSON: You must be feeling really terrific right now.

BLIGE: I feel really, really good. I mean, I put a lot of work into
it. I`m just so happy that the fans are happy and pleased with, you know,
the product. And I just — I put a lot of everything into it, you know.

ANDERSON: How long did it take you to put it together?

BLIGE: It took about a year. I started last November, and we finished
August. And, you know, here it is. You know, I`m just glad, like I said,
I`m happy the fans are happy. And you know, that`s…

ANDERSON: And Mary, I want to ask you, you have been very open about
— you`ve had a tough road.

ANDERSON: And you`ve been very candid about your battles with drugs,
with alcohol. You`ve had bad relationships in the past. How did you turn
your life around?

BLIGE: Well, you know, what happened was I was able to — I was actually
pulled out of the environment that was causing me to sink and not love
myself, like myself and spiral into abusive behavior.

So you know, I mean, I have to really, like, credit my husband for,
you know, being my friend at the time. He wasn`t my husband, but being
my friend enough to challenge me to step out and see the truth, and that`s
what happened. I was able to see it for myself.

And when you`re able to see things, you can change it, you know. When
you can`t see it, you don`t even know you need help, you know.

BLIGE: Totally clean. I mean, you know, I occasionally have a glass
of wine. I`m not going to say…

BLIGE: I celebrate, but I do not do any drugs anymore. And you know,
I`m just trying to keep my mind focused on positive things, although it
was hard. But at the end of the day, that`s where I want my head to be.

ANDERSON: And the music seems to be focused on positive things and encouraging
women. These song titles, some of them: “Enough Crying,” “Going to Break
Through,” “Good Woman Down.”

ANDERSON: What is the message you want to convey here?

BLIGE: The message I want to convey, you know, is the fact that no matter
how hard it gets for women, for men, whoever, don`t give up. You know,
I mean, so many people counted me out. So many people said, “She`s done,
it`s over.” And I will not count myself out.

You know, I went into the studio saying that, you know, I`m going to
make my fans happy and I`m going to make a product that they can always
remember me by.

And you know, the message is, you`re the good woman that they can`t
hold down, regardless of if you`ve been abused, left with a bunch of children,
you`ve been on drugs. You can get — you can do it. You just have to believe
you can do it, you know.

ANDERSON: It`s not insurmountable; it`s not impossible. And you are
known for really empowering women, encouraging them to have a good image.
Here at SHOWBIZ TONIGHT, we`ve done stories on the critics who say women
in R&B and hip-hop are portrayed in a negative way, sometimes in a
degrading manner. What do you think about that?

BLIGE: I mean, I believe it`s, you know, it`s true. You turn on the
television and you see a lot of, you know, just n*dity and 50 million women
in bathing suits, or you know, just with their bodies just loosely out.
But at the end of the day, you don`t know what their stories are and what
causes them to have to make — feel that they have to make a living that
way. So you know, I don`t judge them.

But, you know, I just feel like we — I was in a place where I had to
learn to love myself. You know, I wasn`t n*de [censored to avoid search engine image filters] in all my videos, but I was
doing other things that were abusive and, you know, negative towards myself.

So I mean, at the end of the day, you just have to really figure out
– – or, you have to get in a place where you can see your environment.
If you can`t see it yourself, you`re not going to change it, you know.

ANDERSON: Well, what strides you have made. Congratulations…

ANDERSON: … on all you have done, including this album.

ANDERSON: Mary J. Blige, thank you so much.

ANDERSON: And the CD is called “The Breakthrough.” It is in stores now.